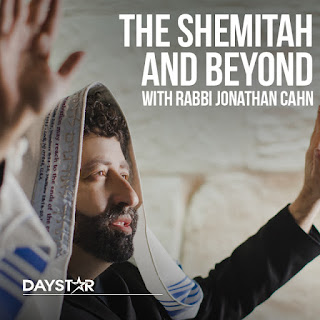 Shalom! Check out this Q&A with Jonathan Cahn from Daystar's blog. God bless!
From Daystar's Blog: We recently had the chance to talk with Rabbi Jonathan Cahn about the mystery of the Shemitah and beyond – part of the interview was in the March edition of the Daystar Partner Newsletter, but you can read the rest of the story right here!
Q: Can you tell us briefly what the Shemitah is, and why it should be important to us?
A: At least up until “The Harbinger” came out, most believers had never heard the word Shemitah, and yet it’s one of the most central of God’s commands.  Every seventh day was the Sabbath Day, but every seventh year was a Sabbath Year – called the Shemitah.  During the Shemitah, all sowing and reaping came to a standstill.  It was an economic Sabbath for an entire year.  And it was a financial Sabbath as well – at the end of the Shemitah, the nation’s financial accounts were wiped clean, all debt and credit was wiped away.  The Shemitah reminded the nation that all their blessings came from God.  And when Israel turned away from God, the Shemitah came back at them, not as a blessing, but as a sign of judgment.

Q: How did you discover the Mystery of the Shemitah?
A: It was when the mystery of The Harbinger was being revealed.  It came to me that the greatest collapse in Wall Street history took place on Elul 29, the very date given in the Law of the Shemitah by which the nation’s financial accounts must be wiped clean. And not just on Elul 29, but on the exact Elul 29 of the Shemitah, which only comes up once in seven years.  Then it came to me that the other greatest collapse in Wall Street history, the crash caused by 9/11, took place on the exact same day – and exactly seven Biblical years from the other greatest crash, down to the day, the hour, the minute, and the second!   After that, I began to see that the biblical mystery was even bigger.  It has affected everything from economic and financial collapses, world wars, global cataclysms, even the rise and fall of nations.  It was that which led to my writing “The Mystery of the Shemitah.”

Q: Is God bound to the pattern of Shemitah?
A: God isn’t bound to anything except being who He is!  I’ve always cautioned that we can’t put God in a box. He doesn’t have to do anything, and nothing has to happen on any set day or time.  At the same time though, it is wise to be ready for any eventuality.

Q: The most recent Shemitah took place in 2015.  Did the ancient mystery again manifest?
A: Absolutely, yes.  Though some focused on dates and the blood moons, believing something had to happen at a set time, many missed the gigantic picture.   The central template of the Shemitah as it appears in the book is not simply of a Wall Street day crash, but of a long-term collapse.  The Shemitah of 2015 produced the worst year for the stock market in seven years, or since 2008 – the last Shemitah!  It saw stock markets around the world collapse, wiping out trillions of dollars from Wall Street to Shanghai.  It produced 20% of the greatest day crashes in Wall Street history!  And as it appeared it both “The Harbinger” and “The Mystery of the Shemitah” before it happened, it decimated other realms.   It caused the collapse of world trade, commodities, the oil market, global production, the retail industry, profits, earnings, revenue, etc.  2015 ended up being the worst year for making money since the last Shemitah of the Great Depression – 78 years ago! And the impact of the Shemitah of 2015 has continued to shake the world into 2016.

Q: Where do you believe America is headed?
A: The Shemitah can be translated as “the fall,” and the Shemitah of 2015 saw a different kind of fall as well.  It was the year that America struck down the order of God, the biblical definition of marriage.  America’s apostasy from God has only accelerated, and the harbingers have not stopped appearing.  As it now stands, we are a nation progressing to judgment.  We need to pray for revival.

Q: Can you explain what the Year of Jubilee means historically?
A: Every seventh year was the Shemitah.  But every seventh Shemitah, or 49th year, ushered in a super Shemitah we know as the Jubilee.  During the Jubilee, the Sabbath of the land, slaves were set free, and everyone who lost their land or their ancestral possession was restored.  The Jubilee was the year of restoration.  At the end of the book is a chapter entitled “The Mystery of the Seventh Shemitah,” and it opens the mystery of the prophetic Jubilee.  This mystery has marked the time parameters of some of the most important events of modern times and end-time prophecy.  It not only marked the greatest shaking in world history up to that time, the First World War, but the restoration of the land of Israel to the Jewish people.  Then, it marked the Six Day War in which the Jewish people were restored to their ancient city of Jerusalem.

Q: What’s the significance of the coming Jubilee in light of the Shemitah year?
A: All of these things can cut both ways.  The Shemitah was a blessing for Israel when they followed God, but a judgment when they did not.   So too, the prophetic Jubilee was ultimately a blessing for the people of Israel, but a loss for the Islamic powers that held the land or that warred with Israel.  Both the Shemitah and Jubilee affirm the sovereignty of God over every part of life and that He is the true source of all sustenance and blessing.  For the world, it can mean shaking.  The Jubilee was, in a sense, a second Shemitah, extending its effects for another year.  On the other hand for those who are in the will of God, all of this can be a blessing – a time of freedom, release, and restoration. A time to be restored to what one has lost, to enter into one’s possession, one’s inheritance of God – a time of God’s favor.

Q: How can people experience Jubilee in their own lives?
A: All of God’s blessings are linked to His will.  The most important key to all these things is that you set your heart and life to be in the center of God’s will.  Whatever is not of God’s will, remove it from your life.  Whatever is of God’s will, get it into your life.  And as you walk in God’s will, you can stand on His promises.  And part of entering your possession in God is to fight the good fight, just as did the generation of Joshua.

Q: With all that we’re seeing in the world today, many people are afraid of what’s to come. What would you say to encourage them today?
A: One thing that was surprising about people’s reaction to “The Harbinger” and then “The Mystery of the Shemitah” was that they were encouraged.  It showed them all the more that God is in charge of everything, every detail, every bank account, every hair on our head.  In Hebrew, the word for safety is “Yeshua,” and “Yeshua” is the name of Jesus.  The key is to make sure your life is in Yeshua and in His will, and you don’t have to fear anything.

Q: Daystar is the only Christian network broadcasting 24/7 in Israel. What kind of impact do you think that has?
A: It’s a tremendous thing that Daystar is able to broadcast the word of salvation to the people from which it came.  I remember being in an Israeli hotel room and turning on the television set and the first thing I saw was Daystar!   Anytime the Gospel is proclaimed, it has great impact.  How much more so for it to be proclaimed in the land of Israel from which it came?  Messiah said he would only return when his people turned to him.  Getting the word of Messiah to the people of Messiah is a crucial part of the Great Commission, of end-time prophecy, and of the heart of God.

Q: Through Daystar’s “Loving the Land” project our partners can receive a deed for a square foot of land in Israel, preserving it as privately owned, agricultural land. How important is that?
A: I think it’s a wonderful project.  First, it’s a very special and unique thing to have a part of the Promised Land.  Second, the gift is going most of all to get the Word of God to God’s ancient people.  It’s a great combination.

Q: You have joined us for a Daystar Israel Tour and travel to the Holy Land often. What would you say is the spiritual climate there today?
A: There are more Jewish believers in Israel now than at any time since the Book of Acts.  That means there’s an opening.  Beyond that, I’ve found that many Israeli Jews are even more open to Yeshua, Jesus, than other Jews in other places.  Just recently a whole list of Orthodox Jewish rabbis put out a declaration saying that Christianity is of God!  It’s an amazing time.  We must continue to pray that their eyes be opened – that Messiah would come.

Q: What does it mean to you to see Christians standing by Israel and supporting your people during this time?
A: It means a lot.  For 2,000 years, what most Jewish people heard from those who called themselves ‘Christians’ was hatred.  In the name of Jesus, Jewish people were persecuted, hunted down, and even killed.  The enemy knew that when the Jewish people come to Messiah, his battle would be lost.  So he’s done everything in his power to stop that.  But now, for the first time since the first-century, Jewish people are discovering that true followers of Messiah not only don’t hate them but actually love them and pray for them and want to bless them.  This is the best witness there could ever be.  It’s a blessing for me to see.  How much more does it bless the heart of God?

http://www.daystar.com/news-updates/general-updates/beyond-the-shemitah-with-rabbi-jonathan-cahn/
Posted by The Harbinger Ministry at 2:33 PM