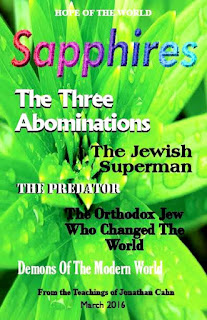 Dear Friend,
Some things the media will not show you but which are crucial to be aware of…
THE THREE ABOMINATIONS
Word for the Month & for Tues., Mar. 1
Scripture: Ps. 81:9
See Message: The Abominations
There are a few things the Bible speaks of as abominations leading to judgment - three in particular…
The First Abomination
The first was Israel’s sin of offering its children as sacrifices on the altars of Baal and Molech. The blood of the nation’s innocents cried out for judgment. And in 586 B.C. the judgment would come. America has committed the same abomination. Beginning in 1973, it has offered up not thousands of children as Israel did, but millions of them, killed in their mother’s wombs, on the altars of convenience and self. And America’s collective hands are now, likewise covered with blood.
The Second Abomination
The second abomination cited in Scripture linked to judgment is that of sexual immorality, specifically that involving the twisting of gender. America began driving God out of its culture, at the same time it began embracing sexual immorality, endorsing it, and then promoting it. Its descent in the direction of sexual immorality has been continuous, progressive, and intensifying in its twisting of God’s natural order.
The Third Abomination
The third abomination would seem to be the most unlikely in modern America. In Hebrew one of the words for abominations, “shikkutz,” has a double meaning – it also means an idol, a false god. As Israel turned away from God, it turned to other gods. In its last days as a nation, the images of these gods filled the land – and then judgment came. America has also turned away from God. The American gods are not called gods and the American idols are not recognized as idols, but they are so nonetheless. As the culture expunged God from its midst, it became filled with the gods of self, pleasure, sensuality, money, success, comfort, greed, sexuality, entertainment, power, vanity, and a multitude of others. But could the sign of foreign gods appear in America as the images of these gods appeared in ancient Israel in its last days?
The God of Darkness
This past summer, the same summer in which America struck down the biblical definition of marriage, an image appeared in New York City. It was seen on the tower which once represented America’s grandeur and stature among the nations, the Empire State Building. It was an image of a foreign god – the god Kali. Kali is the Hindu god of darkness. The image was created by projecting thousands of lumens of light onto the tower – light used to produce darkness – or as the Bible says “woe to those… who put light for darkness.” Kali is also the god of death and destruction. The face appeared with its tongue sticking out. This is because the god Kali is typically depicted as in a drunken frenzy dripping with blood from its tongue. Since The Harbinger came out, the harbingers have not stopped appearing in America. As believers, we would have to be blind to not see the signs of the times all around us. In a time of gods and idols, we must all the more strongly, boldly, and unapologetically stand for and manifest the only true and living God with our words, our actions, our lives, and our ways.
Stand as a light this month, and manifest the light of His truth, and the radiance of His love wherever you go, and in all you do. And May God greatly bless you this month as you do.

Your brother and co-laborer
in His love and service,
Jonathan
Posted by The Harbinger Ministry at 9:21 AM