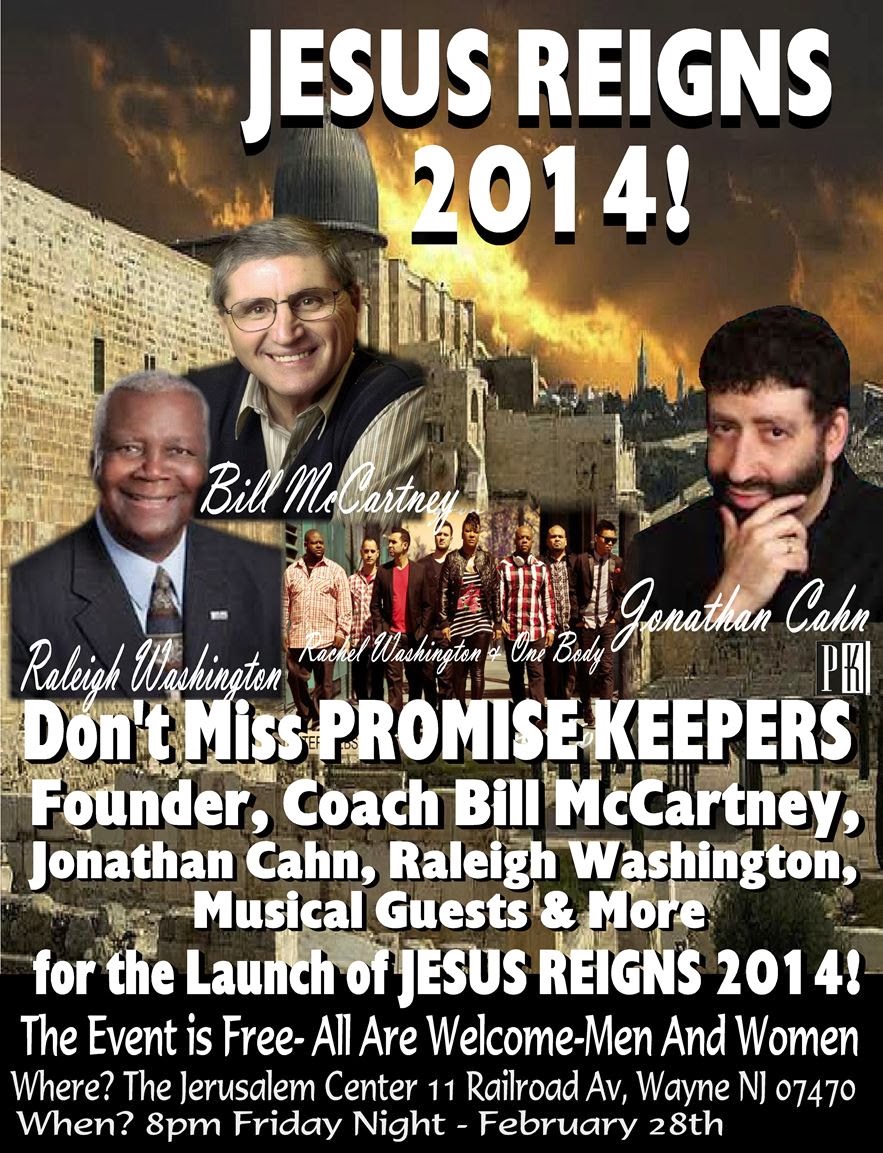 Posted by The Harbinger Ministry at 9:05 PM

Christians Join With Israel's Messianic Jews for Historic Meeting in Gehenna
Posted by The Harbinger Ministry at 9:04 PM

Posted by The Harbinger Ministry at 8:56 PM

Shalom! Check out this Press Release for the Jesus Reigns 2014 Kickoff!

EVENT IN ISRAEL WILL CREATE LARGEST VIRTUAL GATHERING OF CHRISTIANS EVER

One Message, a ministry of Promise Keepers, will host the historic Jesus Reigns Israel Event this September 17th to unite Christians and Jewish believers worldwide.  This will be the largest virtual gathering of Christians in history.  It will take place at Gehenna outside Jerusalem.  In the Old Testament, Gehenna was known as the gates to Hell, because people burned their children there as sacrifices to a god of fire.
One Message and Promise Keepers will hold a news conference on Friday, February 28th to discuss the historic event and how Pastors from across America can travel to Israel to change lives.  The news conference will be held at 11 AM at The Jerusalem Center/Beth Israel Worship Center at 11 Railroad Ave., Wayne, NJ 07470.  Messianic Rabbi Jonathan Cahn, an internationally known author, will speak at this news conference.
The Jesus Reigns Israel Event will be broadcast through simulcast and the Internet in the U.S., Israel and other nations. Christians around the world will unite to witness this historic summit.  One thousand Christian Pastors from the United States, Europe, Africa, South America and Asia will join together with Israel’s Messianic Jewish community. This historic meeting will send the message worldwide that Jesus Reigns; that Christians must help the poor; and that Christians must obey the word of God and stand as one with the people of Israel to increase faith in God across our planet.  Coach Bill McCartney and Dr. Raleigh Washington of Promise Keepers are available for interviews now on this life changing journey to Jerusalem.
Posted by The Harbinger Ministry at 8:56 PM 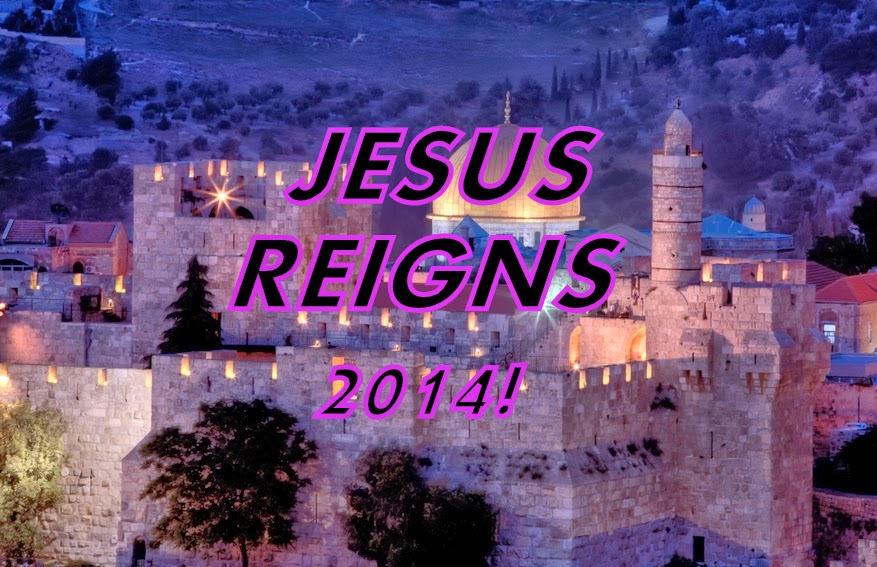 Shalom! Here's a clip from The Harbinger Decoded DVD


Posted by The Harbinger Ministry at 8:52 PM 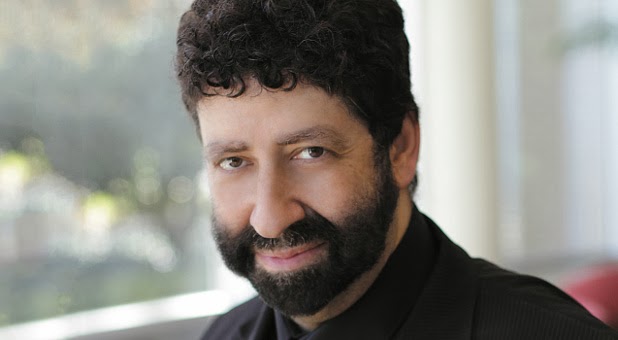 Jewish 'Harbinger' Author Jonathan Cahn Shares Base of His Christian Faith
Posted by The Harbinger Ministry at 10:27 AM

Email ThisBlogThis!Share to TwitterShare to FacebookShare to Pinterest
Shalom! The Harbinger is now available in...
PORTUGUESE, SWEDISH, FRENCH, GERMAN,NORWEGIAN and HUNGARIAN. The following is a list of sites you can purchase these translations from. We are so blessed that this message is getting out to so many readers. We give God all the glory!


Posted by The Harbinger Ministry at 2:04 PM 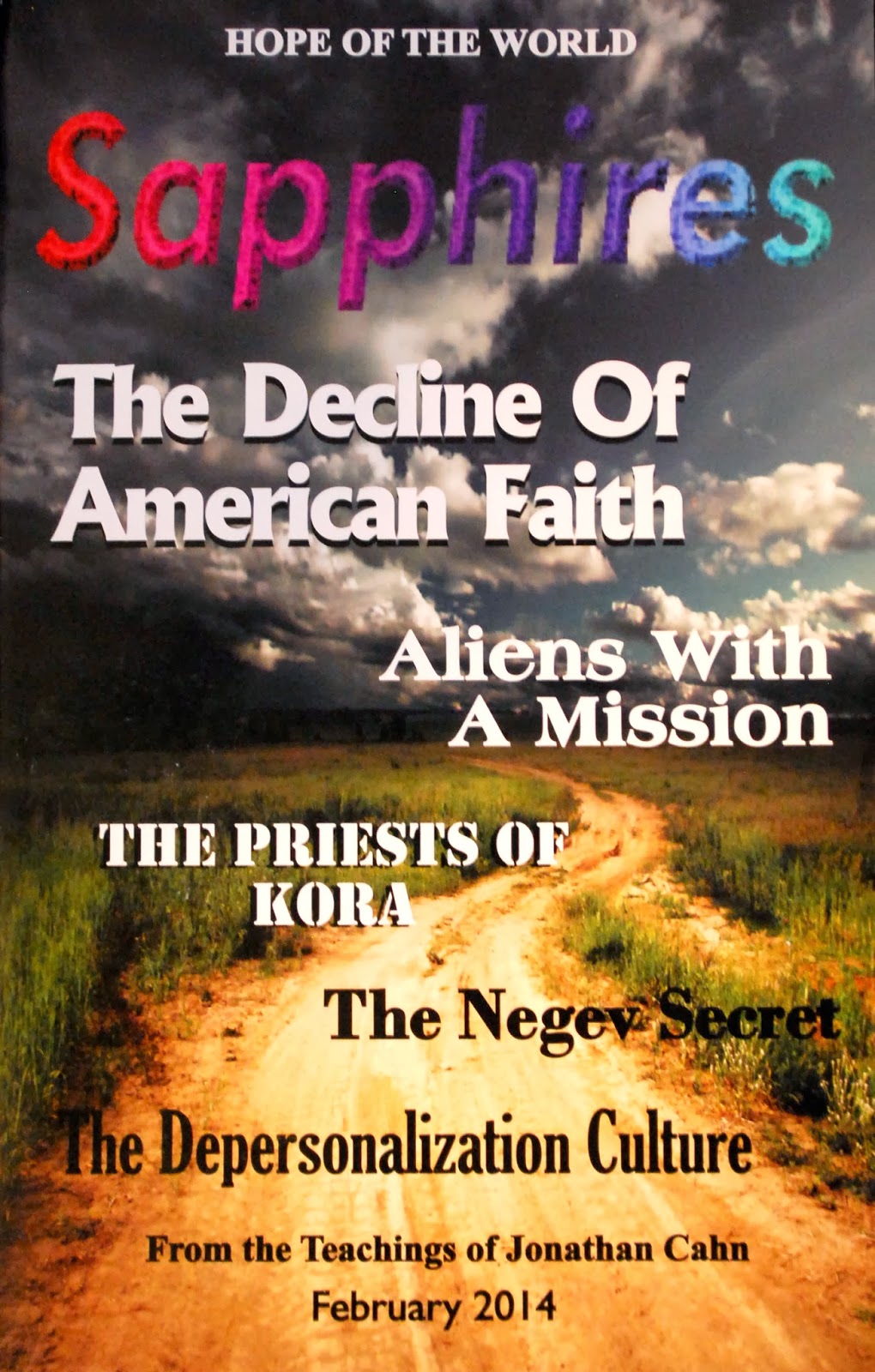 THE DECLINE OF AMERICAN FAITH

Word for the Month & for Saturday, Feb. 1
Scripture: Colossians 2:6-8
See Message: The Days Of Elijah III

A recent poll uncovered a dramatic development in American spirituality.  According to a new Harris Poll, faith in God is declining, and this decline has taken place over a relative short period of time.
According to the poll, the percentage of Americans who believe in God decreased from 82 percent to 74 percent in just a few years.  In 2005, the number of Americans believing in heaven was 75 percent.  In just a few years, the number has decreased to 68 percent.  Those who believe in the resurrection of Jesus went from 70 percent a few years ago to 65 percent today.  The percentage of those believing in hell declined from 62 percent to 58 percent now.
On the other hand, the percentage of Americans believing in Darwin’s theory of evolution increased from 42 percent in 2005 to 47 percent now.  The percentage of Americans believing in creationism was 36%, the same percentage of those believing in UFOs.  A larger percentage, 42% of Americans believe in ghosts.
Absolutely certain that there is a God decreased from 66 percent in 2003 to just over half, 54% now.   The percentage of Americans who describe themselves as somewhat religious is now 40%, down from nearly half, 49%,  just six years ago.  The percentage describing themselves as “very religious” is now only 19 percent.  At the same time, the numbers identifying themselves as “not at all” religious is now at 23% - a figure that, in just six years, has doubled.
The results of the poll are strikingly consistent and significant.  It took generations for the Roman Empire to shift from a pagan framework to a Christian or biblical one.   But the changes reflected in this poll have taken place in just a few years.
If the current rate of change continues, in twenty five years we would have an America in which the majority are atheists.   This is not even  taking into account the possibility of increasing momentum, a snowballing effect – nor does it take into account those who strongly hold a truly biblical faith, a percentage undoubtedly much smaller than the 40% who consider themselves somewhat religious.
What is behind this shift?  The figures are consistent with the warning of The Harbinger.  They are the statistics of a nation in apostasy.    They follow America’s spiritual, moral, and cultural departure from biblical morality.  They also warn of the future – as they reveal a divide between the old and the young – the old are more likely to hold faith – the young and upcoming generation are less likely to hold faith.  The young are also less likely to even consider themselves to be “Christian” at all – real or nominal.
Is this all negative?  Not necessarily.  One of the dynamics of the end-times is that of polarization – the grays disappear.  The number of true believers in America has always been a minority.  Thus it can be argued that a good deal of the declines revealed in such polls reflect the disappearance of nominal Christians, and nominal faith, the removal of the grays.   What that will increasingly leave are true believers, more true, more pure, and more radical for the Lord.  Let us be that people.
May God greatly bless you this month as you shine more truly, more purely, and more radically for the Lord.

Posted by The Harbinger Ministry at 3:00 PM