** SPECIAL REPORT** Guess What Happened The Last Time The Price Of Oil Crashed Like This?…

By Michael Snyder
There has only been one other time in history when the price of oil has crashed by more than 40 dollars in less than 6 months.  The last time this happened was during the second half of 2008, and the beginning of that oil price crash preceded the great financial collapse that happened later that year by several months.  Well, now it is happening again, but this time the stakes are even higher.  When the price of oil falls dramatically, that is a sign that economic activity is slowing down.  It can also have a tremendously destabilizing affect on financial markets.  As you will read about below, energy companies now account for approximately 20 percent of the junk bond market.  And a junk bond implosion is usually a signal that a major stock market crash is on the way.  So if you are looking for a “canary in the coal mine”, keep your eye on the performance of energy junk bonds.  If they begin to collapse, that is a sign that all hell is about to break loose on Wall Street.
It would be difficult to overstate the importance of the shale oil boom to the U.S. economy.  Thanks to this boom, the United States has become the largest oil producer on the entire planet. 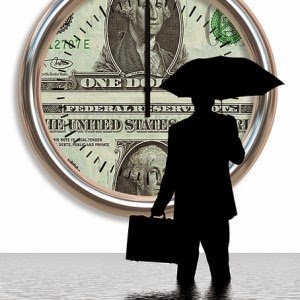 Yes, the U.S. now actually produces more oil than either Saudi Arabia or Russia.  This “revolution” has resulted in the creation of  millions of jobs since the last recession, and it has been one of the key factors that has kept the percentage of Americans that are employed fairly stable.
Unfortunately, the shale oil boom is coming to an abrupt end.  As a recent Vox article discussed, OPEC has essentially declared a price war on U.S. shale oil producers…
For all intents and purposes, OPEC is now engaged in a “price war” with the United States. What that means is that it’s very cheap to pump oil out of places like Saudi Arabia and Kuwait. But it’s more expensive to extract oil from shale formations in places like Texas and North Dakota. So as the price of oil keeps falling, some US producers may become unprofitable and go out of business. The result? Oil prices will stabilize and OPEC maintains its market share.
If the price of oil stays at this level or continues falling, we will see a significant number of U.S. shale oil companies go out of business and large numbers of jobs will be lost.  The Saudis know how to play hardball, and they are absolutely ruthless.  In fact, we have seen this kind of scenario happen before…
Robert McNally, a White House adviser to former President George W. Bush and president of the Rapidan Group energy consultancy, told Reuters that Saudi Arabia “will accept a price decline necessary to sweat whatever supply cuts are needed to balance the market out of the US shale oil sector.” Even legendary oil man T. Boone Pickens believes Saudi Arabia is in a stand-off with US drillers and frackers to “see how the shale boys are going to stand up to a cheaper price.” This has happened once before. By the mid-1980’s, as oil output from Alaska’s North Slope and the North Sea came on line (combined production of around 5-6 million barrels a day), OPEC set off a price war to compete for market share. As a result, the price of oil sank from around $40 to just under $10 a barrel by 1986.
But the energy sector has been one of the only bright spots for the U.S. economy in recent years.  If this sector starts collapsing, it is going to have a dramatic negative impact on our economic outlook.  For example, just consider the following numbers from a recent Business Insider article…
Specifically, if prices get too low, then energy companies won’t be able to cover the cost of production in the US. This spending by energy companies, also known as capital expenditures, is responsible for a lot of jobs.
“The Energy sector accounts for roughly one-third of S&P 500 capex and nearly 25% of combined capex and R&D spending,” Goldman Sachs’ Amanda Sneider writes.
Even more troubling is what this could mean for the financial markets.
As I mentioned above, energy companies now account for close to 20 percent of the entire junk bond market.  As those companies start to fail and those bonds start to go bad, that is going to hit our major banks really hard…
Everyone could suffer if the collapse triggers a wave of defaults through the high-yield debt market, and in turn, hits stocks. The first to fall: the banks that were last hit by the housing crisis.
Why could that happen?
Well, energy companies make up anywhere from 15 to 20 percent of all U.S. junk debt, according to various sources.
It would be hard to overstate the seriousness of what the markets could potentially be facing.
One analyst summed it up to CNBC this way…
“This is the one thing I’ve seen over and over again,” said Larry McDonald, head of U.S strategy at Newedge USA’s macro group. “When high yield underperforms equity, a major credit event occurs. It’s the canary in the coal mine.“
The last time junk bonds collapsed, a major stock market crash followed fairly rapidly.
And those that were hardest hit were the big Wall Street banks…
During the last high-yield collapse, which centered around debt tied to the housing sector, Citigroup lost 63 percent of its value in the following 60 days, Kensho shows. Bank of America was cut in half.
I understand that some of this information is too technical for a lot of people, but the bottom line is this…
Watch junk bonds.  When they start crashing it is a sign that a major stock market collapse is right at the door.
At this point, even the mainstream media is warning about this.  Just consider the following excerpt from a recent CNN article…
That swing away from junk bonds often happens shortly before stock market downturns.
“High yield does provide useful sell signals to equity investors,” Barclays analysts concluded in a recent report.
Barclays combed through the past dozen years of data. The warning signal they found is a 30% or greater increase in the spread between Treasuries and junk bonds before a dip.
If you have been waiting for the next major financial collapse, what you have just read in this article indicates that it is now closer than it has ever been.
Over the coming weeks, keep your eye on the price of oil, keep your eye on the junk bond market and keep your eye on the big banks.
Trouble is brewing, and nobody is quite sure exactly what comes next.
Posted by The Harbinger Ministry at 9:17 AM